Home > Blog > The Garden Isle: A Look Back In Time

The island of Kauai, commonly referred to as the Garden Isle, is home to white sand beaches, dense rainforests with cascading waterfalls and jutting volcanoes, colorful flora and unique wildlife, and arguably some of the most spectacular sunsets.

This lush island retreat is so much more than just an exotic getaway for those in search of some much-needed R&R; it boasts a rich and dramatic history full of twists and turns that lead to it becoming one of the most photographed places on the planet. Formed by gradual volcanic overflow, Kauai is the oldest of the main Hawaiian Island and is steeped in ancient mythology.

The first settlers to reach Kauai’s shores were Polynesians who inhabited the island from the time of their arrival in 400 AD until the Tahitians conquered them nearly 600 years later.

The Royal Coconut Coast of Kauai was one of the most sought out places among early settlers due to its fresh water sources and fertile land that was prime for growing crops.

Many of Kauai’s people consider Kauai to have belonged to an entirely separate kingdom and history than its sister islands, a theory based on evidence that Kauai was once home to a formidable tribe of Polynesians known as the Menehune.

The early societies in Kauai practiced a mana form of polytheism, meaning they believed their different deities could take on various forms, including animal or human in order to pass through society undetected.

Ancient places of worship known as heiau were erected and some are still standing today.

Most legends and practices, including those of the Menehune, are kept alive through Hawaiian chants and songs, which are often performed in conjunction with the hula dance.

Not to be left out of the spoils of newly discovered territories, Europeans voyaged to Hawaii in the late 16th century.

James Cook was the first European to set foot on Hawaii in 1778 and originally named the entire island chain the “Sandwich Islands” after Earl Sandwich IV.

Initial contact between English sailors and native Kauaians was peaceful and mostly centered around bartering goods.

Kauai soon became a popular trading port for voyagers, a missions field for traveling clergy, and a sought after living destination for wanderers in search of a piece of paradise. In 1819, Kauai and the neighboring island of Ni’ihau joined King Kamehameha’s Kingdom of Hawaii after much resistance—the last of the Hawaiian Islands to join the Kingdom.

King Kamehameha had previously tried to take the islands by force twice by arming an armada of ships and canoes and failed both times.

Afraid of the threat of another invasion, Kauai’s King Kaumuali’i decided to peacefully join the Kingdom of Hawaii without any bloodshed and ceded Kauai to the Kingdom in 1824.

The arrangement proved to be good for strengthening the Hawaiian Islands as a whole until American forces overthrew the Hawaiian monarchy in 1893.

After its overthrow, Sanford B. Dole served as the President of Hawaii until its annexation to the United States in 1959.

The Dole family had a long-standing presence in Hawaii in the form of the Hawaiian Pineapple Company, which later became the Dole Food Company on Oahu.

The original Kauaians utilized the overabundance of sugar cane on the island for everything from medicinal purposes to love potions.

Natives would suck on sugar cane stalks to drink the sweet nectar inside but didn’t know how to extract it to make sugar.

As soon as a process was discovered and perfected, sugar became a profitable crop, and numerous sugar plantations popped up all over the island, causing production to soar.

Kauai flourished under a prosperous economy from both the sugar and pineapple industries from the late 1800s until the late 1950s when Hawaii became a state and divisive labor strikes began to occur.

It was largely due to this plantation era that Kauai became the cultural melting pot it is today.

Most of the island’s locals are descendants of immigrants that arrived from all over the world to work the sugar plantations, namely Japan, China, the Philippines, Portugal, Puerto Rico, Spain, and Germany.

The original Polynesian bloodline also still runs strong on Kauai with many of the island’s longest-standing families being of direct Polynesian descent.

Now you can actually tour the sugar plantations by way of the water, through sugar tubing!

By the 1960s, travel to the island was booming.

Vacationers weren’t the only ones with Kauai on their radar: Hollywood also had the Garden Isle in its sights.

Elvis Presley was one of many celebrities who frequented the island during that time, notably at the Coco Palms Resort, where several scenes from the movie Blue Hawaii were filmed.

Hollywood producers also found that Kauai was ideal for shooting movies due to its rugged, natural beauty that closely resembled multiple different places around the world yet was close by the mainland and contained no actual predators lurking in its jungles.

Raiders of the Lost Ark

Pirates of the Caribbean Travelers continue to trek to Kauai from every corner of the world looking to experience a piece of this tropical paradise.

Something a current visitor to Kauai may not realize is that the island was devastated in the form of Hurricanes Iwa and Iniki in 1982 and 1992, respectively. Both hurricanes inflicted mass damage across the island, but Kauai has since been successfully restored and rebuilt.

On the north shore of the island is Hanalei Bay, sporting nearly two miles of pristine beach against a backdrop of jutting green mountains.

Just a couple of miles from the beach is Makai Club Resort, a lush and tranquil tropical oasis. Whether it’s golfing on the property, indulging in daily yoga, or simply taking in island breezes on the lanai, this is the ideal location for complete rejuvenation. 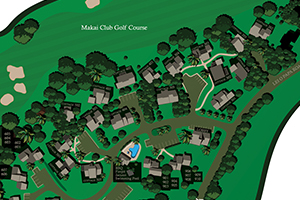